Warning: "continue" targeting switch is equivalent to "break". Did you mean to use "continue 2"? in /kunden/355858_700000/www.bdg-asia.com/wp-content/plugins/gravityforms/common.php on line 1273

Warning: "continue" targeting switch is equivalent to "break". Did you mean to use "continue 2"? in /kunden/355858_700000/www.bdg-asia.com/wp-content/plugins/gravityforms/common.php on line 1310

Warning: "continue" targeting switch is equivalent to "break". Did you mean to use "continue 2"? in /kunden/355858_700000/www.bdg-asia.com/wp-content/plugins/gravityforms/common.php on line 1314

Warning: "continue" targeting switch is equivalent to "break". Did you mean to use "continue 2"? in /kunden/355858_700000/www.bdg-asia.com/wp-content/plugins/gravityforms/common.php on line 1342

Warning: "continue" targeting switch is equivalent to "break". Did you mean to use "continue 2"? in /kunden/355858_700000/www.bdg-asia.com/wp-content/plugins/gravityforms/common.php on line 3476

Warning: "continue" targeting switch is equivalent to "break". Did you mean to use "continue 2"? in /kunden/355858_700000/www.bdg-asia.com/wp-content/plugins/gravityforms/common.php on line 3483

Warning: "continue" targeting switch is equivalent to "break". Did you mean to use "continue 2"? in /kunden/355858_700000/www.bdg-asia.com/wp-content/plugins/gravityforms/common.php on line 3496

Warning: "continue" targeting switch is equivalent to "break". Did you mean to use "continue 2"? in /kunden/355858_700000/www.bdg-asia.com/wp-content/plugins/divi-builder/includes/builder/functions.php on line 4993
 Vietnam’s electronics sector: development, locations and opportunities - BDG Asia
All Insights

In one of the previous BDG publications, we have explained how Vietnam’s manufacturing sector, and especially electronics and mobile phones manufacturing subsectors are thriving. When taking a look at the country’s exports in 2015, 30% of total exports came from the electronics subsector (Figure 1).

These results were attributed to companies such as Samsung, Intel and LG, who especially started investing in the last 7-8 years. For a more detailed breakdown of electronics exports, see Figure 2.

Past: electronics as the unknown territory

Vietnam’s accomplishment of becoming major electronics manufacturing center, which can, as an example, produce up to 240 million handsets for Samsung solely (vs. 150 million in China) was not obvious even to die-hard optimists.

The first steps with electronics manufacturing date back to the 1950s, when the North Vietnam’s government started importing components from the Soviet bloc for local assembling processes. In the 1970s, first Japanese investors arrived to the South, where they assembled black and white TV sets. However, due to the war, the electronics sector never got off the ground.

In the 1990s, Asia was already considered as a major location for electronics manufacturing, with Japan, South Korea, Taiwan and China being the leading manufacturing centers. As economies developed, and consequently costs of manufacturing increased, companies operating in some of these countries had to move their production sites to other countries in order to stay competitive. Vietnam, which slowly started opening its boarders to international business in that period, was one of the promising locations.

Because of Vietnam’s beneficial labor costs compared to some regional countries, electronics manufacturers mainly focus on product assembly in the country. Higher value added processes, such as product design and software development, are slowly starting to develop, although still being in their infancy.

Samsung and LG are leading the way of current electronics sector’s development in Vietnam. Samsung is particularly having Vietnam in its long term plans with enormous investments (12+ billion USD), diversification of the production portfolio and the opening of a mobile R&D facility in Hanoi. With factories in Thai Nguyen and Bac Ninh provinces, the company has strong presence in the north of the country, focusing on assembling smartphones for the global market (the facility in Bac Ninh can solely produce more than 120 million handsets annually). Furthermore, Hanoi R&D facility is Samsung’s biggest mobile R&D center in Southeast Asia. The presence of this center, which is focusing on software development for smartphones, is a sign that Vietnam is capable of performing higher value-added processes.

The northern city of Haiphong is the home to LG’s pristine ‘Haiphong Campus’ (total investment of 1.5 billion USD). This facility will boost the company’s production of TVs, smartphones and car infotainment systems, which are mainly manufactured for worldwide exports. With LG’s investment, and presence of Fuji Xerox, Kyocera and Meiko, Haiphong is becoming a major electronics manufacturing location in Vietnam.

In Southern Vietnam, HCMC’s Hi-Tech park is home to manufacturing facilities of companies such as Intel, Samsung and Jabil. Intel operates a test and assembly facility for more than 6 years, while Samsung focuses on producing smart TVs in their brand new manufacturing plant in the outskirts of the southern metropolis. To see the locations of major electronics manufacturers in Vietnam, please have a look at Image 2.

Great amounts of electronics exports going out from Vietnam to the rest of the world are without a doubt impressive. However, we need to take into consideration how much of the parts needed for assembly of electronics products are manufactured inside of Vietnam.

In the previous 10 years, Vietnam accomplished trade surplus only in 2012, 2013 and 2014, even with constantly rising total exports.

The above results can be related to the extensive FDI projects in product assembly (including electronics) and garment industry, which flocked the country from the mid-2000s. These two rapidly expanding sectors required components and raw materials that could not have been produced in the country, thus increasing the need for greater imports.

When taking a look at exports and imports of electronics in Vietnam in 2015, we still see (Table 1) great reliance on imported electro-nics products and parts, albeit the export surplus. From this simple analysis we can conclude that leading electronics manufacturers still import the majority of parts which are then assembled in Vietnam facilities.

Recently, Yasuzumi Hirotaka, a representative of Japan’s trade promotion agency JETRO in HCMC, mentioned that Japanese firms in Vietnam only have local content of 14% meaning that the rest of goods have to be imported overseas.

The fact that big international manufacturers import most of the parts does not mean they want to follow this strategy.

Back in 2014, Intel mentioned that they are striving to have 80% localization rate in the country. However, the reality is still too far from this number.

In addition, Fuji Xerox is hoping to have 90% localization rate in the next few years. The current number of 50% is impressive, although mostly derived from foreign suppliers that have own production facilities in Vietnam.
When it comes to Samsung, the current localization rate is between 30 and 35%. Similarly to Fuji Xerox, most of the suppliers are foreign companies operating in Vietnam.

With high localization ambitions of international manufacturers who are strengthening their clusters in the north and south of the country (Image 2), opportunities for additional suppliers to join the market are significant. Furthermore, with these global companies having Vietnam in their long-term strategic plans, coupled with Vietnam’s slow-yet-steady rise in electronics value chain, BDG believes it is high time for electronics suppliers to join this exciting market.

Whether your organization would like to supply manufacturers from abroad, or enter the local market and increase the localization electronics supplier, BDG team would be honored to become your trusted local partner. 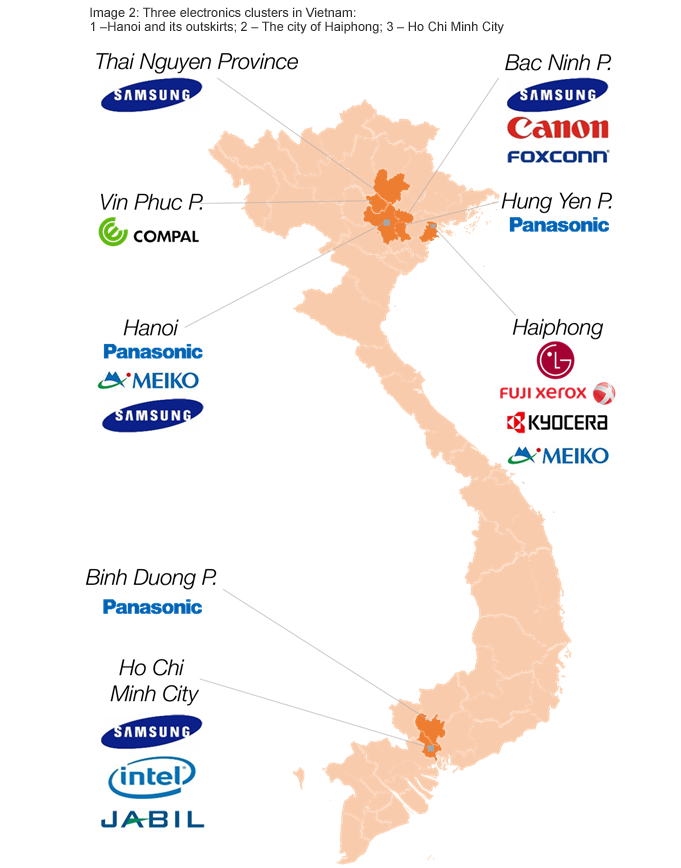 The Spotlight Vietnam Newsletter aims to present major socioeconomic developments, investment opportunities and events happening in Vietnam. We invite you to subscribe and embark on a unique journey with this exciting ASEAN country! We will be sharing Vietnam insights once every quarter.

Join our mailing list to receive the latest insights on Vietnam's opportunities and development. We will be sending the newsletter once every quarter.

You have Successfully Subscribed!